This world is just a matter of learning how the levels/hazards work and how to get past them easily.

(Use The Kid unless I say otherwise)

All level ratings are relative to this world's levels only.

Just ride the lift to the end. For the part with the moving gear. Jump to the wall when the gear is on the right side.

This level is all about going fast. If the lava catches up to you, switch characters/exit to map to reset, then try again.

Just take this level slowly and you'll be fine. Remember that there's a fireball that will pop up occasionally for the first two lava pits.

Fairly straightforward level. Using The Kid gives you more maneuverability when jumping past the sets of gears. There's a fireball that pops up as you're riding the vertical lift, and another one that jumps right after you're past the two gears. If you know they're coming, you should be able to avoid them easily.

Jump to the center area, wait for the lift to descend, then quickly jump across it. For the last part, just hug the right wall and you should be able to make it to the platform at the bottom which allows you to jump to Bandage Girl. Also, watch out for the fireball that pops up from time to time.

To get past the gears in the first part, hold run and move right as a gear is ascending. For the wall gears, get on the same wall as the gear, and hold jump when you're just under the gear. For the second half of the level, get on the right wall and slide down (tap right a bit to land safely) to where the last obstacle is. The last part is identical to the first.

This one just requires you to move from corner to corner and jump over the occasional fireball while getting there. Once you reach a corner, wait for a fireball to pass before moving up. This might take a bit of practice to get used to.

As The Kid, double jump to the wall on the right that's sticking out, then do a running up to the left at the portal at the end. You'll emerge at the bottom part. Just jump again to reach a wall, then drop down and jump to Bandage Girl.

Go through the two portals and get the key. You'll need to jump over a couple fireballs after. At the last part, do a running jump to the lower portal and you should make it to Bandage Girl.

Do one long jump to the right and enter the portal. Once you emerge below, do another jump to reach the wall. Grab the key, then just double jump your way to the opposite wall and reach the goal.

Start by running to the left wall, climbing it, and jumping around the eyeball to the higher platform. Once there, jump so you go over the eyeball, and fall at its right side to the platform below. Grab the key, and backtrack using the same route you took the first time.

Go clockwise first. Scale the wall, and grab the two keys. After getting them, go counterclockwise to grab the third key, and make your way to Bandage Girl.

Make sure the eyeball lasers are blocked by a wall/platform before moving to the next available wall/platform. Route shown below. 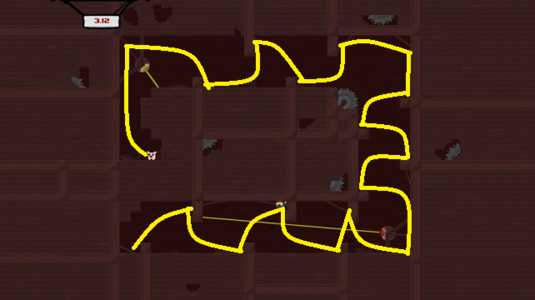 Say hello to the hell maw. Evil things these are. Get used to how they behave, otherwise you'll be dying a lot. They basically home in on your location and try to crash into you. Once they hit something, they split into 6 smaller fragments.

That aside, to actually clear the level easily, start by running right, a maw will emerge and crash into the floor. Jump over the debris it leaves behind. Jump to the part of the wall that's sticking out, then jump to the upper ground. A maw should have appeared and crashed into the extended wall. Now you can jump and run left to get the key

Just know the route, and you'll be fine. For the upper area, keep running left and a maw will appear and miss you, but make sure to jump over the fragments it leaves behind. Once you reach the wall, you can simply make a mad dash to the left once it crumbles and you'll be able to make it to the goal.

Jump to the first portal and go left. Hop over the gears. When you get to the part with the portal that's in the air, wait for a fireball to enter it, then follow its lead and jump into the portal. You'll need to jump over one fireball, then run to Bandage Girl after that.

Wait for about 10 seconds at your starting point, then jump right into the big area. You'll need to dodge one maw along the way, but other than that, you should be good to go once you get on the moving platform.

Keep moving from one side to the other, and jumping occasionally to dodge the maw fragments. Once the elevator has descended, let a maw appear and crash into the floor before descending.