Very manageable levels. Very doable trophy. Except for 4-8X, there aren't a lot of very tight jumps you need to make. Just a good knowledge of the levels, obstacles and mastery of jump mechanics will get you through most of them.

(Use The Kid unless I say otherwise)
All level ratings are relative to this world's levels only.

Not much to say here except when dropping down, slide on the wall instead of trying to go between the gears.

Ride the lift to the end. With The Kid, you might not even need the lift!

Just a matter of being quick for this one. If the lava is closing in on you, quit to the map to save your tail.

Not too bad a level as long as you take your time and anticipate the fireballs.

With The Kid, you don't need to enter the building at all. Just double jump on the outer walls to reach the top, then hang around the left walls to reach Bandage Girl

To get past the gears at the bottom, start moving as soon as the nearest gear rises. When in the middle part, go over the big gear to be safe.

Definitely a rough one. For the first section, it's safe to jump to the next level once a fireball drops down and the gear above is moving left. For the other parts, just make your way to the corner and you'll be safe from the fireballs, and can jump to the next level easier. For the final part before Bandage Girl, wait for the lower fireball shooter to fire, then jump to Bandage Girl.

Try your best to enter the first portal while clinging to a wall, then jump off and head clockwise, jump straight up into the portal. Now you can get the key. The rest of the level isn't too bad.

With The Kid, you don't need to enter any portals. Just double jump to the rightmost wall, grab the key, head to the other side, and double jump to Bandage Girl.

This one requires practice to get the timing down. Climb up the left wall and stay a little bit above the lone square block where lava is flowing. The eye will eventually be blocked by the wall, so you can go around it and grab the key. When you're going to the other side, try to get on the platform by sliding up there, not jumping, as the laser can get you if you jump. Repeat the same process for the other side, grab the key, and return to Bandage Girl.

Go clockwise, grab the two keys, then keep going counterclockwise to get the other keys. Make sure to grab the middle key quick as it'll fall to the spikes if you're too slow.

Safest path outlined in yellow. If you're feeling brave, you can take the red path, but I wouldn't recommend it. 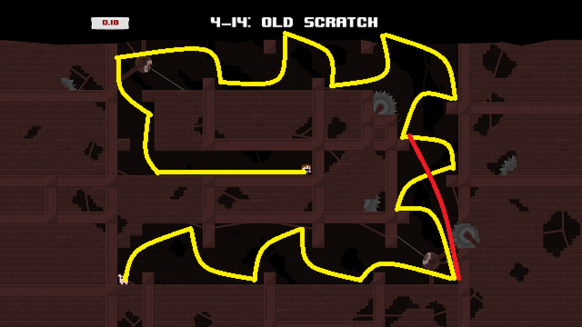 There's a big open space, so this level is not as bad as it seems. Just stay on the move and anticipate when the maws will spawn, then dodge accordingly. Jumping from a wall to an opposite wall as a maw spawns will usually end with them missing you completely.

Take the path outlined in yellow (hold run the entire time too), near the end of the route, you need to do a short jump onto the wall to dodge the maw fragments. Then, take the green route, and finally, the blue route. Make sure to wait a little bit when you're on the other side of the wall so that the right laser will be blocked by the wall. 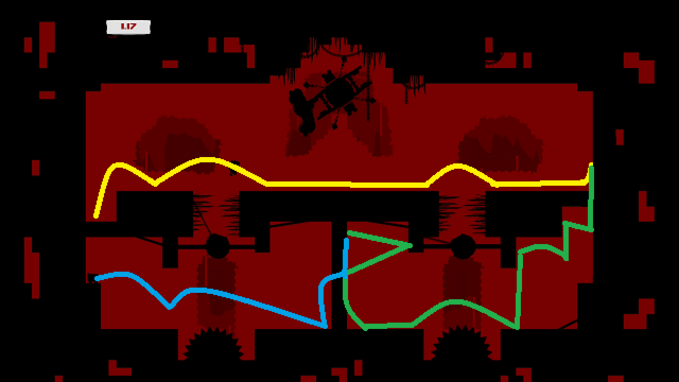 Tricky part is getting to the portal section alive. Wait for a fireball to hit the wall, then stay behind it. The next fireball that goes through the portal should fly over you. Next, quickly do a long jump to the portal and you're past the hard part. For the last portal, make sure you're falling when you enter it.

When you're in the wide open area, a maw will occasionally fire off after you. Anticipate this and jump out of the way. You'll need to do this 3 times before you're safe to get on the moving platform again.

​Make sure you crumble the blocks in the center first, then just keep moving from one side to the other until the elevator is all the way down. Stay in the air a lot to prevent too much of the floor from breaking.

The only part that's difficult is the jump between the gears in the start and getting past the eye laser near the end. It works similarly to 4-12X. The others you can take your time on. For the final part with the maw, nothing's changed. Just run right, and jump when the maw lands and you'll dodge it and the way to Bandage Girl will be open.