This world seems very intimidating, but as I kept playing, I was surprised at how many easy levels there actually were, and the ones that are hard are not really too hard or luck-based with enough practice.

The first 8 levels (and possibly 7-16) listed are the main ones where you have a good chance of dying. The others become easy with enough practice. Level 16 is saved for last because of how long it takes to get a decent run. Feel free to start it earlier in the run if you want.

Walk for the first part of the level, then once you jump over the triple sawblades, hold run the rest of the way.

Neat trick in this one. Wait until 10 saws fire in the upper level. The 11th saw won't fire, which gives you a big opening to jump down and start dashing to the other side. Do stop a little bit to wait for the saw that's after you to catch up bit, then start running again. When you get to the other side, run into the wall, slide down, and jump when you're just over the saw machine, and you'll make it intact (The 11th saw should be "firing" on the lower part, giving you a bigger gap). From there, it's just a mad dash to the other side.

Seems hectic, but you'll be completely safe from harm if you stand in the corner of the pedestals. If you wait around the 1.4-1.5 second mark, you can jump through a lot of the blades and reach the third pedestal alive. From there, simply wait in the corner for an opening, and dash to the 4th pedestal, and wait for an opening to jump to Meat Boy.

The trick is to not hold the run button for the lower part. For every saw at the bottom, you need to jump to the next platform, then wait a bit at the left side and jump over the incoming saw, then repeat until you reach the other side. From there, you just need to be patient and wait for an opening for you to cross under the saws. The constantly firing saw is a non-issue as the area is large enough for you to jump over it.

You'll just need to be patient and wait for opening for you to jump from one key to the next. The first opening I usually take to jump over is around the 3.20 mark, then I jump to the other side half a second later.

Run! You can jump over the first sawblade set without any issues. After that, it's just a matter of controlling where you need to go while running. You can take some time to plan your jumps for the last 3 blades.

A bit luck-based level. I find that walking straight into the first fan gives you the best chance of getting the needed height to go between the center blades and into the next fan. Once you get the key, walk into the second fan and hope you get enough height to reach the top. This might require a few exits to the map. If you can anticipate that you won't make it, and can quit to the map consistently, you can save this as one of your later levels.

Simply go under the saw blades and you can do a long jump to the other side, completely bypassing most of the level.

The saws fire the same way in every room, fire slowly, and never change direction. Just be patient and don't get too greedy and this is a really easy level.

First hard level! Once you know what to do though, it's not too hard. Make a mad dash to the walls and crumble the blocks. Dodge the missiles, then go under the center platform (your starting point). After that, you dash to grab one key, then dodge the incoming missiles, and head to the safe zone. Rinse and repeat until all keys are acquired.

The last part is getting to Meat Boy. Make a mad dash to either side, jump straight up so you're sliding, do two quick wall jumps, then jump straight to the center. Immediately after landing, jump straight up to the top, otherwise the missiles will get you. This will take a number of tries to get the execution down, but even then, it's possible you'll still fail at the last part. Make this one of your first levels.

Keep moving! For this level, I tend to never stay on the same side of the missile launcher for too long, and usually try to switch my relative position to it (right of the launcher vs left) I also jump every now and then to throw the missiles off. It's not too bad once you get the launcher's timing down.

Wait for the left gear to shoot up, and the top gear to fire, then start moving. Jump once to avoid a gear, head to the right side and slide straight down. You'll have to jump over a gear a couple times when going to the left, then the rest is straightforward.

This level has two shortcuts, one at the beginning, and one at the end. If you make use of them, you'll buy some extra time to get through the obstacles and not have to worry about the rising lava too much. 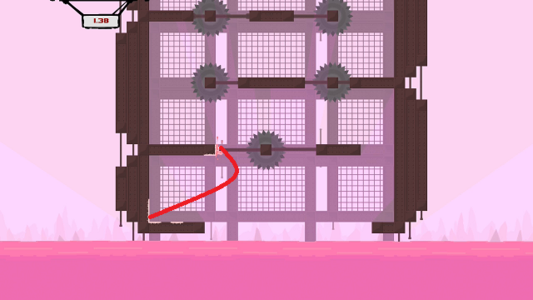 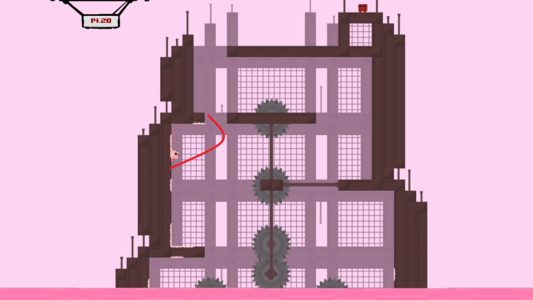 Shortcut #2 (There's also another shortcut slightly below, but much harder to pull off)​

Run to the left wall, wall jump a couple of times, then do a long jump to the keys. Hopefully, you'll get two or even three. Head back to your starting position and use the opposite wall to get the remaining keys.

There's one maw waiting at the top though. Make sure it hits a wall after it spawns and doesn't cross over to the right side, otherwise you're most likely dead. I'd quit to the map if it crosses over. From there, the right side should be easier. Simply stand on the opposite side of the maw gate, wait for a maw to spawn, then grab the key and descend. Repeat this until you reach Meat Boy.

This level's fairly reliant on positioning, and can be a little luck-based at times. I wait for the orb to go under the first gear, then I do a long jump to it and hope for the best. I saved this level for last because I wasn't up for having to repeat it over and over again since it can take a while to get a good run of it. Even though it's one of the harder levels, it's also very easy to not die in this level, as long as you don't stay too close the gears and make use of the exiting to the map trick when you fall or think you'll crash into a gear.

This level is one of those that can be completed 100% of the time if you know what to do. First, wait for the cannons to fire, then immediately do a long jump to the right when they do. Next, stay directly under a cannon and wait for it to fire. Next, jump on the wall, wait for the cannons to fire, then jump left, and up to the upper area. Wait under a cannon again, and after it fires, make a mad dash to Meat Boy. Here's a visual aid below. 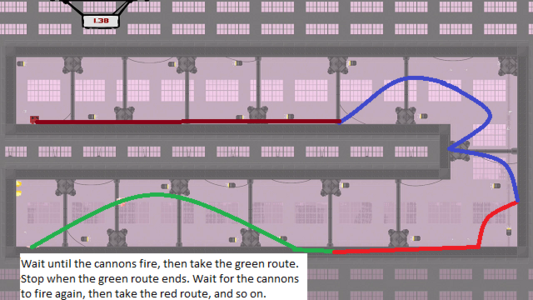 The trickiest part of the level comes from jumping over the small gears in the beginning and end. You'll also need to occasionally hit 4 switches and get past the gates before they close. When playing on the PS4, I find that sitting closer to the monitor helps with timing those tricky jumps. Get used to doing these, as you'll need to master them for the next level and the Iron Man run.

This level is all about going fast. The hardest part is at the end. I hope you're familiar with the jump timing for the low gears, because there's about 8 of them you need to jump over at the very end. If you're having trouble, try practicing on 7-19's gear in the beginning.