Hardest Iron Man yet? Yes. Impossible? No. This will take a few hours of playing the levels and dying repeatedly to master the tricks and shortcuts and find what levels you're great and not great at. There are more levels that fall under the Hard category in this set than any other Iron Man, but after enough tries, this is very, very doable.

Note: I don't strictly follow this order, but I make sure I do the first 10 levels in the order above.

Levels 7 through 9 are fairly short and contain two of the most luck-based levels in the set. 14 and 15 are easy to screw up on, as is 19 and 20. 6 and 13, while a bit tricky, only have a couple hazards to worry about, and can be dealt with by quitting to map.

Easy levels once you know how to play them

Easy level, but the hard part is the jump between the first vertical sawblade at the bottom. Do this one earlier than later because it's easy to mess up.

Don't hold the run button. Take it slow and get a rhythm going jumping between the sawblades. When the time comes to jump to the upper level, wait for a saw blade to fire, then head to the corner and jump straight up, and jump off the wall to the upper level, then repeat the jumping process.

This level is just a matter of finding a jumping pattern that works for you and executing it to perfection. I hold the run button the entire time I'm doing the jumping. It's easier to just check out the video to see what movements you need to do. This should be one of your no-dying levels easily.​

Very similar concept to the previous level. I stay on the left side mostly and only jump to the right once near the beginning. When I reach the top of the left side, I wait for the smaller gear to move up and then start going down before I go for Meat Boy.

Take this one slow, and victory is assured.

Tricky one. Run up to the left wall, jump straight up, and try to get to the highest point on the wall. This might require a short jump to get the needed height. Long jump to the right over the big sawblade, then long jump left between the two sawblades above, then after that, it's just a matter of repeatedly long jumping left and right to the goal (although, when you get to the part of the really big sawblade in the center, stick to the right side).

Annoying level. walk over the fan, then bob and weave left and right until you get to the 2nd fan, then do the same till you get to the next fan. Get yourself over that one, and go to the center to reach the goal. Highly recommend doing this level first as it's short and kinda luck-based. 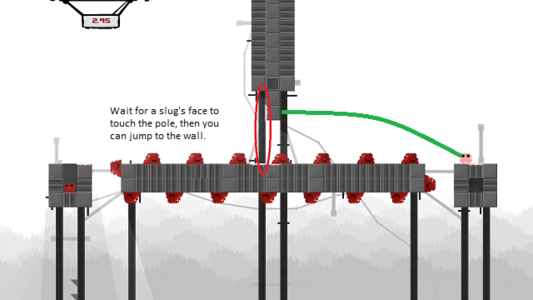 Even though this isn't that hard a level, I do this early because it's short and it comes between two difficult levels.

This level seemed impossible at first, but the trick is to hold the run button when you're sliding down the conveyor belt, and release it and start holding left as you ascend. I usually start holding left about 25-50% of the way up. If done right, you'll gain enough height to go over all the gears. I will admit, it's still fairly difficult to pull off, and you'll still die occasionally (as evidenced in my video), so make this level one of your first ones to get rid of the luck-based factors.

I hate missiles, but this one is not too bad. Expect to die a few times while trying to master this stage though. The part near the end with the two launchers in between can be a bit tricky to get past, but all you have to do is get to the first set of them, stand between the first set of two launchers and the wall, wait for the one on the left to fire, then once the wall crumbles, jump over the incoming missile on the right and head to the wall, jump straight up and jump to the opposite wall once the launcher on top fires.

After that, just keep running left and the missiles will miss you completely. A wall will separate you and Meat Boy now. Just anticipate the launcher above you firing and move out of the way when it does, then you're home free.

This level used to give me trouble at first, because of the part near the end where you need to jump to a higher area while there's a gear firing straight down at you. To get past that, simply wait a bit and anticipate when the gear will fire, then get on the wall and do a long jump as the gear fires, and you should clear this part easily.

If you can believe it, this one is even easier than 3-13X, just take it slow, be careful, and you'll make it without a scratch.

There's 2 shortcuts in the level (which are in the same place as the light world version), rest is just running the obstacle course. You can do a wall jump to the upper area in the beginning , and another one in the end. Get used to taking these shortcuts and this level becomes a lot more manageable.

When you get to the top, walk until you get the key, then press the run button for a tiny bit to get yourself up to the necessary platforms. This is one of those levels that takes a while to get used to, but becomes at least a Medium difficulty once you know what to do. 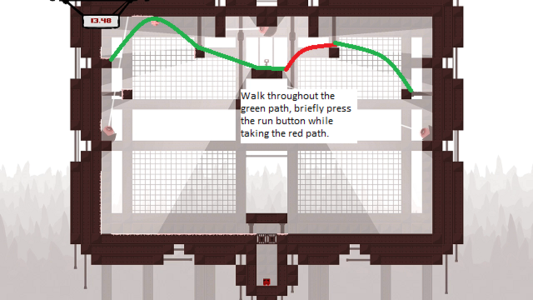 Annoying level. There's a trick to this level, but I've never managed to pull it off, so I do it the old-fashioned way. Start by heading left and doing a long jump. The left maw should hit the platform on the top. Exit to the map if it doesn't. Jump to the wall, and jump right to get the key. Some maws should appear, so you'll want to make them land around the center of the area. Exit to the map if this doesn't happen.

Rest of the level is just running back and forth and jumping occasionally. As long as you stay near the center when the maws spawn, you should be mostly fine. You can also exit to the map if you think that they'll get you. Once the way to Meat Boy is open, run and fall straight down to him. DO NOT JUMP as you will most likely die. Believe me, I've died a lot at the very end due to doing this, but once I started running into the hole, the dying stopped.

This is similar to the light world version. Wait until the orb is under the first gear, then do a long jump to it. From there, it's just navigating the rest of the area with proper positioning.

Even though this is one of the harder levels, I save this level for later because it's very annoying to get right, and usually requires multiple exits to the map before a success. I highly recommend keeping your distance from the gears if you go with my suggestion to do this level later, so as to avoid dying from them. You should be able to easily anticipate when you'll fall into the pit, which is solved by exiting to the map.

This level is easy once you know what to do. Upon entering the level, hold the run button and jump right over the first horizontal bullet, then do a long jump, wall jump to the upper area, stand between the middle and right cannon on top, then start moving when they fire.

It's recommended to cluster the oobs before getting the key, but if you want to get the key ASAP and you're confident enough in your ability to get them clustered in time, be my guest. You can also exit to the map if you can anticipate that they'll kill you. 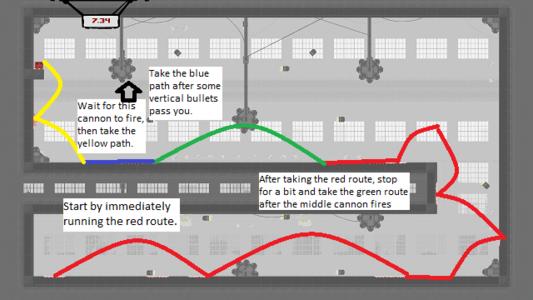 The hardest part of the level is the last section at the top. Walk the whole way for this one. I take a deep breath when I reach the top, and just hold the right button, start counting from 1 to 7 and jumping during every count. It might take a while, but if you find a rhythm that works for you, this level can be one of the easier ones.

This is pretty much the reverse of the light world version. Just do what you've done for the light world and you'll be fine. Don't sit around too long because of the buzzsaw ceiling, but after you get past the first diagonal moving gear, they shouldn't be a problem anymore.