This is the world where you can get The Kid. Do so, and you can unleash his power upon the world. With him, you only some chance of dying in half the stages. The other half is really easy with the right approach.

(Use The Kid unless I say otherwise)
All level ratings are relative to this world's levels only.

​For the start of the world, there sure are a few tricky jumps to be had. For the part where you're in the building and you need to jump between the two gears, wait until the right gear is at the bottom, then you can jump through the gap and to the right wall. For the part with the two gears on the left side, wait until both gears are at the top of the wall, then start scaling the right side. Rest of the level is fairly easy.

Not much to worry about here. The gaps you need to jump through are very big, so there's little danger of dying.

Slide down the left wall when the gear is out of the way. For the next part, wait till the gears on the ground are moving left, then you can jump over them. Afterwards, jump on the orbs and fly to the right side. Once you're inside, wait for the gears to be at the very left of their path, then start running (do not jump) and you'll pass them easily. For the last part, wall jump until you're just under the gear that's guarding the wall, then once an opening appears, hold jump and you'll jump and slide up, just giving you enough height to jump to Bandage Girl.

Jump over the first orb's field, and you'll fly to the wall. hold jump button at the peak of your slide, and you'll jump to the next orb. Jump off when you reach the top, and fly to the left side. When inside, jump over the orb, and try to end up in the top left corner. Once there, you're safe to jump over the gear that's in the way and reach Bandage Girl.​

Not much to say here. Just hold run the whole way and jump accordingly.

With double jump, you can skip all the switches except the last one. Only the last part where you must jump between the gears is going to pose any threat of getting killed, which isn't too bad if you use Ogmo.

If you fail to get any of the keys as they fall, switch characters to restart. When you're backtracking to the start, and you get to the part where you need to get past two gears, wait till the gear on the right is at the top of the wall, then jump to the right wall and immediately jump to the left wall and climb that until you're at the top.

There's plenty of time for you to move to the safe spots as the elevator descends. For the moving gears, the only one you'll need to jump over is the first set of two. Everything else can be avoided by staying to the left, or center.

This is where the zombie meats first get introduced. Their AI is basically: jump when you jump, and follow you around if you're close enough to them. If you keep your distance from them and keep jumping, you can bait them to go wherever you want them to.

That said, there's a shortcut at the top of the first building on the right (notice the gears?) Head up there and jump over the two gears to avoid the first zombie. The second one you do need to deal with, however. Jump up the wall and jump over it as it approaches, then run right and grab the key. A second one will drop down, so lure both of them to the right side, then make a run to the left when they're in place. Climb up the building again, and return to Bandage Girl.

Start the level by immediately double jumping, which will make you enter the chute. Stay there until you get the key, then around the 9 second mark, you should be free to double jump your way to Bandage Girl.

Start by jumping to the top of the level. It might not look like it, but you can actually go over the first part and avoid the gears and zombies entirely. Keep running to the right, and do a double jump to easily get to the rightmost part of the level. Hit the switch and two zombies will fall. Lure the zombies to the right or have them suicide into the maggot pit. Once they're in place, hit the switch again and run to the top part. Once you're in, you just need to get past those moving gears to win (I usually just run straight through them when they're at the lowest point.

Start by double jumping to the top, then you can simply bypass everything. If you're uneasy about jumping between the gears on the last part with the disappearing platforms, get on the first platform, run off it, and you should be able to double jump to Bandage Girl.

Using double jump, you should be able to easily get to the top. If you mistime both jumps and fall, switch characters to reset.

You can use double jump to scale the cliff and avoid getting any keys.

This level might take a few tries to master, but it's not too hard once you get the hang of it. The hardest part is making the jump over the huge maggot mound. To do so, see the picture below. 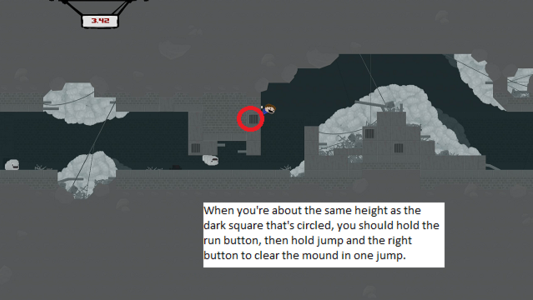 After that, simply hold the run button, keep going right, and jump once when you're at the edges of any maggot pits to jump over them.

Easiest level in the world. Simply double-jump through the orbs to reach Bandage Girl. If you fall, switch characters to reset, then switch back to The Kid to try again.

Jump over the first wall after the cannons fire in an X pattern. Do the same with the second wall. Drop down the left side and you'll dodge a missile. Run to the right wall and let the missile destroy it. Once the wall is busted, keep running right and jump the wall, then keep running left. After you crumble a wall, go through it, but stop for a bit, then move left to dodge a missile. Now scale the wall and be prepared to jump over one missile when you land. Now, head to the right and let the missile destroy the wall to finish the level.

Do one long jump and float over the orb field to grab the key, then just keep floating until the way to Bandage Girl is clear. You'll have to move left and right occasionally to dodge some bullets, but you should be fine as long as you make slow movements.

Jump up, break the first wall, then after the gear shooter fires, start running right. You'll break the second wall and drop down safely. Keep running right and scale the wall, let the launchers destroy the wall, then hit the switch. Drop down. For the next area, move between cannons each time they fire (stay still for X shots, and jump once for + shots). Climb the disappearing wall, then for the last part, do the same thing you did for the first gear shooter to get past it.

In the first area, get the oobs' attention and move a bit to the left and they'll follow you. Once you've moved all three left, keep running right and none of them should follow you. Use double jump to get past the disappearing platforms. In the next part, keep running right and the missiles will break a hole in the floor. Jump through the hole and you just need to get past one disappearing bridge (use double jump if you fall to get past it easily) to beat the level.