​This world... It has a lot of gears and ugly hazards, like missiles and gravity orbs. Also a lot of tight jumps to be had. There aren't a lot of easy stages either, so brace yourself for the second hardest Iron Man challenge in the game!

Unless I say otherwise, I recommend using The Kid for every level.

The Alien Hominid can jump over the gears straight to Bandage Girl, bypassing over half the level.

There's one very tricky jump in the middle of the level where you must use a gravity orb to propel yourself between two gears. I hope your trigger finger is ready, because once you make the jump, pause and try to judge your trajectory whether or not you'll clear it. If not, restart the run and keep trying until you make it.

Alternatively, you can do the following: 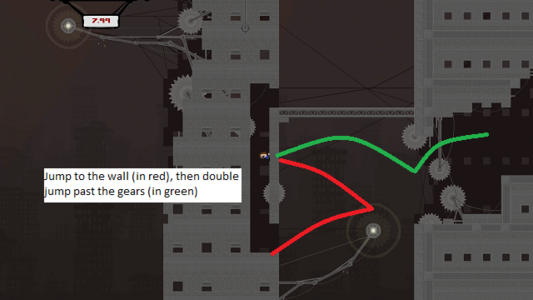 This is one of those stages that becomes easy with practice. Head to the right first because that side's harder. When you reach the right area, do a double-jump to cross the gap only when the gravity orbs are close to the ceiling. To reach the key, get close to the bottom of the gear that's in the way, then hold the jump button and you should slide up high enough to go over the gear. Grab the key and enter the left side.

There's a shortcut you can take straight to the key by simply running through the orb, or climbing the wall below the orb. Simply run through the orb again to go back to your starting point. Now, jump to the top of the orb to propel yourself to the wall, and once you're between the gears, hold run and jump to the second orb and ascend. Do a long jump to the orb and hope you make it to the other side. From there, jump over the orb to get enough height to reach Bandage Girl.

I admit Meat Boy has an easier time with the first part, but not so much with the jump at the last section. That's why I say stick with The Kid. For the first part, just hold run the entire way and when close to the switch, do a double jump to reach it. You should be able to make it to solid ground when you land. From there, you only need to jump over three low gears, then hit the switch and double-jump over the gears to Bandage Girl .

You can drop down and double jump to the opposite wall to skip all of the switches except the last one. I recommend using Ogmo instead of The Kid for this one because he has lower jumps, which reduces your chances of dying to the ceiling gears in the last part.

​Not really much to this level. Just grab the keys quick and get through the narrow passageway to Bandage Girl. If you miss a key, switch characters. You'll be seeing a lot of those low gears in later levels, so you'll need to master jumping over them.

This level is all about knowing the correct path to take. I find the best time to start moving is when the platform is covering the bottom of the gears you want to move under. Midway through the level, you'll need to jump over the sets of two gears that are going back and forth. For the section with the vertical gears, stay on the left, then walk under the gear that's second to the left once it passes you, then walk under the leftmost gear when it passes. For the last part, you'll need to walk between the gears when an opening presents itself.

I recommend baiting the missile launchers to destroy the zombie meats to make the level easier. Just have the missile destroy the two zombies below your starting point, then proceed and lure more zombies to get them killed by the missile. Repeat until the way to the key is open. For the last part, you can choose to lure the two zombies down one at a time and dispose of them the same way, or you can make a run for it. You could also lure one down to get killed, and just run past the 2nd (remember, they don't jump unless you do).

​The moment you spawn in the level, jump up to the ceiling that should be opening up and get in the chute. You should be able to grab all the keys without much issue. Once all the keys have been acquired, drop down and do a double-jump to the area where Meat Boy is.

​There's a shortcut at the top of the level that allows you to bypass the gears below. Be careful if you choose to take it, as you might go out of bounds. The only other tricky part of the level is hitting the switch between the two gears. Falling on the switch might be easier than riding the gravity orb up to it. Once you hit the switch and enter the room where Meat Boy is, getting past the gears is easy.

​You can jump to the top of the level after crossing the bridge of disappearing blocks. Once on top, stand on the platform to the right of the gear shooter and do a long double jump to the platforms where the key is. Grab the key, and head right to finish the level.​

​The Kid's double-jump will give you a second chance in case you mistime a jump. With him, you don't even need to go near any gears.

​The Kid's double jump will allow you to easily reach the top of the level without getting the key. Just watch out for the oobs. Lure them to the left side if they become a problem.

This one takes a while to get used to. Keep running until you reach a maggot crawling on the walls, then wait for it to enter a hole in the ceiling, then go under it. Long jump over the hill, and for the last part, hold the run button and jump at the edges. Sometimes, the maggot that should be crawling on the wall will be on the ground. If this happens, you must quit to the map, switch characters, or die.

​​There's only one hard part in the level: the shaft with the falling gears. When climbing, hold the run button, hold the direction of the wall you're jumping from (e.g. if you're jumping from the left wall, hold left, and vice versa), and press jump as a gear is just over you, and you'll jump between them. Keep doing this till you exit the shaft. From there, simply double-jump to the top and you just need to jump past a couple of moving gears to clear it. Do watch out for the nearby oob though, as it can ruin your day.

They're pulling the big guns here! Start running and jump straight at the wall. Jump over it and land. Head right of the cannon and jump on the wall after it fires in a + pattern. Jump to higher ground once it fires in an X pattern and jump over the incoming missile, then drop down and stay in the corner. Jump over the missiles as they come, and wait for the gear shooter to finally fire. After it does, hit the switch and keep running (no jumping, you'll dodge all the incoming missiles while running) right and enter the passageway before the wall reforms. From there, you just need to rely on the skills you've acquired from doing Missile Boy to avoid the missiles and have them destroy the walls to reach the goal.

Tricky level, but fortunately, there's a trick to make it a lot easier and a very exact process to know in order to make it through unscathed. First, wait for the center cannon to fire (should be an X pattern), then jump to the middle platform and stay on the cannon's left, then 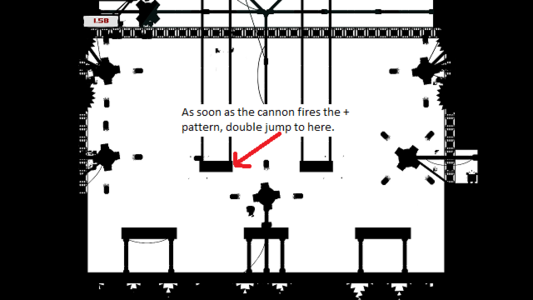 Once you're on the wall, double-jump off it, to reach the key, then keep going left, but stay right of the leftmost cannon to avoid the stray bullets. Then... 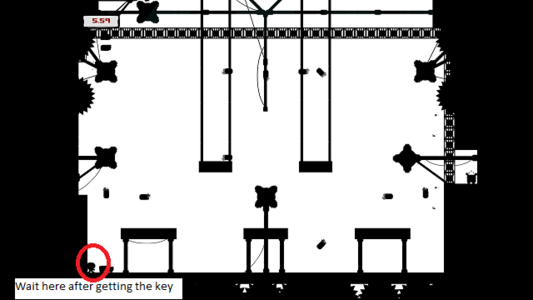 ​A floor of gears will rise in a few seconds, but staying there will leave you unharmed. Once the gears pass, slowly move towards the bottom of the rightmost platform and wait there, until... 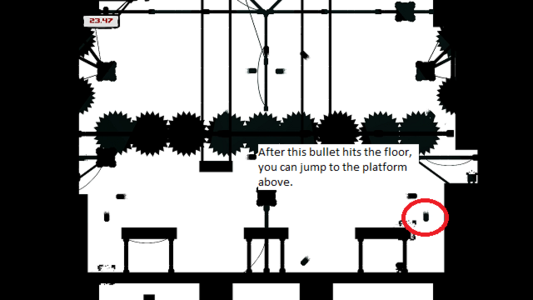 And after jumping to the platform... 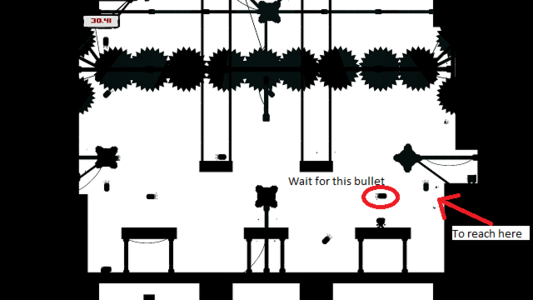 Then you can jump straight to Bandage Girl. This process will take a while to get down, but once you've done it a few times, it becomes a lot easier of a level.

​IMO, the hardest part is getting past that gear shooter in the beginning. Rest of the level is not too bad. Stay on the left wall and hold jump when the shooter fires, then jump back to the left wall. You'll gradually move up, and reach high enough to crumble a wall. Go through it, then keep running and the missiles will hopefully open a path in the floor for you, otherwise you might need to dodge some to open up the floor.

In the next part, wait for the cannons to shoot an X pattern, then move in between two of them, jump when they fire the + pattern, then move in between the next set of cannons and start moving to safety after they fire an X pattern. Use double jump to get past the disappearing wall easily. Finally, at the top, break all of the first wall, and wait for the gear shooter to fire. After that, keep running right and you'll eventually break the wall and reach the end.

The first part is just a matter of how used you are to jumping over those small gears. Not many tricks for that one. With The Kid, getting past the open area with the disappearing platforms should be easy, just watch out for the gear shooter. Once past that, well... the diagram below will explain it better. After that, it's just jumping over one low gear to clear it. 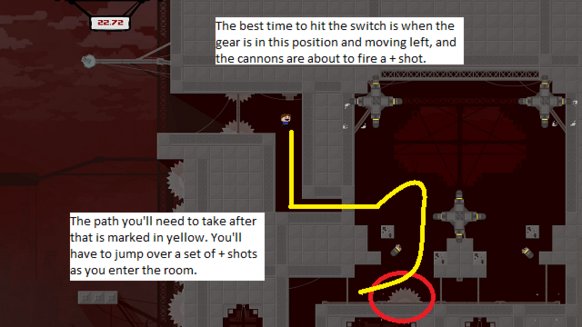